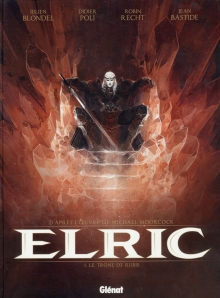 The Legion of Andy hasn’t been this excited about a new French BD album release since we saw a new Arzach book a few years ago. Though exquisitely drawn, that volume was frankly a bit of a disappointment in the story department. (Only a bit mind.)

Now here is Elric: Le Trône de Rubis, and the word disappointment just isn’t going to rear its head. This hardback is by Julien Blondel (script) and Didier Poli, Robin Recht & Jean Bastide, art. They have taken the first chunk of Michael Moorcock’s 1970 fantasy novel, Elric of Melniboné, and fashioned from it something new, and very wonderful. As Will Shakespeare might have said, nothing of it that doth fade, but doth suffer a sea-change into something rich and strange.

Elric is of course Moorcock’s most famous and enduring sword-and-sorcery creation. Sometimes called the anti-Conan, Elric is a physically feeble albino, sustained by sorceries that would have the butch Cimmerian reaching for his metaphorical revolver, equally at home in the library as on the battlefield. Elric, Prince of Ruins, was born into a life of regal splendour which the barbarian Conan struggled to achieve by force of arms.

The new French Elric, complete with Black Blade, from the sketchbook section at the back of the new BD album

Walter Simonson has previously given us the best of Elric in the US comics, with original stories by Moorcock himself, in DC comics mighty Elric: The Making of a Sorcerer (comic 2005-6, collection 2007) and before that DC / Vertigo / Helix’s Michael Moorcock’s Multiverse in 1997.

2012 brought more US comic-book goodness, with Boom! Studios’ Elric: The Balance Lost, an excellent effort by writer Chris Roberson to shoehorn just about every character from Moorcock’s ever-branching Multiverse into one new 12-issue story. Elric’s presence here was diluted by sharing the spotlight with two major co-stars, Corum and Hawkmoon, as well as the many other characters who made more-or-less fleeting appearances. These included some created for the book by Roberson.

As Moorcock fans of long standing, the Legion enjoyed Balance Lost very much, in spite of some occasionally dodgy artwork. However we do think inviting the whole Eternal Champion family – and some previously unknown cousins – along for the ride might have made it pretty heavy going for the wider market.

Now Trône de Rubis brings us in some ways back to the undiluted Real Thing – original recipe Elric, a dish which the French, it has been said, have taken to their hearts more than any other nation. This four-man French team has started at the beginning, not in terms of publication date (Elric debuted in short-story form in 1961) but with the book in which Moorcock himself went back to the beginning of the story, nine years later. Elric of Melniboné recounts the early days of the albino’s rule as Emperor on the titular Ruby Throne, before he has acquired the cursed runesword Stormbringer, or the wicked chaos lord Arioch as his patron. Both of them play major parts before the novel is out, though in Le Trône de Rubis the story only gets as far as Arioch’s first manifestation. The Black Blade has to wait ’til volume 2, which will be called, imaginatively, Stormbringer.

(Why does the Legion think “L’Épée Noire” might have been a better title? Because the second Elric book, preceding Elric of Melniboné by a good few years, was called Stormbringer, and it gave us the very end of Elric’s saga, not the beginning. There’s enough confusion around these bloody titles already, even for the most seasoned of readers. Don’t get us started on Gollancz’s perverse decision a while back to re-title their Fantasy Masterworks Elric collection “Elric of Melniboné”..!)

So… original recipe Elric? Well, not really, no.

It’s better than that! These cheeky Frenchies have had the gall to re-imagine quite significantly some elements of the story, which might on the face of it seem sacrilegious to a true Moorcock fanatic.

Firstly, they kick things off dramatically with Elric’s birth, a traumatic event which sets the scene for much that is to come. This is canon; Moorcock alludes to the event in the books, but does not take us back to witness it as we do here.

Secondly, this new team’s Melniboné is very much their own vision. Every artist who has tackled the towers of Imrryr, Elric’s capital city, has given them their own look. The French team have gone one better, re-building Melnibonéan culture around giant crystals, which are everywhere to be seen. Perhaps this started with their own re-making of the Ruby Throne itself, carved (as Moorcock told us) from a single giant gemstone. Previous artists have seen the throne as a more-or-less conventional big chair, albeit richly decorated. Not these guys, as can be seen on the book’s cover.

These could be considered minor changes, there are more fundamental alteration sot the narrative itself. These too are to be admired, in the main, rather than condemned. Online preview pages were pre-released, and from the first glimpse The Legion got of Melnibonéan torturer Dr Jest, it was immediately clear that these boys knew what they were doing. Jest is remade from a very nasty piece of work wielding a scalpel into a very nasty piece of work wielding even more scary (and visually effective) magic torture spells.

Does this fit entirely well with Moorcock’s concept of Melniboné as a supremely decadent, sorcery-based culture? Why yes indeed. And there’s more in the same vein (pun intended) as we see that Elric himself, and his betrothed Cymoril, are as much products of this dissolute society as Dr Jest himself.

Moorcock does tell us this in the original narrative, but what Blondel, Poli, Recht & Bastide are doing in this BD, fittingly for such a visual medium, is graphically showing us, in ways seamlessly integrated with the telling of the story.

Not only that, but they positively revel in Melniboné’s appalling and evil side. This makes for a shift of emphasis at the very core of the tale, and it’s none the worse for it. In particular, the Legion would argue that it makes for a more comprehensible and sympathetic lead character. As Elric comes to recognise the wickedness into which he has been born, readers may be more likely to embrace his point of view than if reading a straight adaptation of the novel. 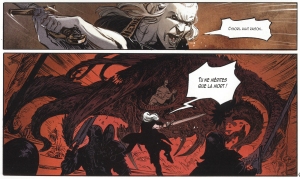 Fifty-plus years on from the political milieu in which Elric first emerged, this is of no small consequence. His original readers were more likely to recognise in Melniboné a metaphor for Britain (or indeed France) in its declining Imperial role, and in Elric something akin to an Angry Young Man or, more aptly, a Baader-Meinhof-ist rebel. Today’s readers may respond more directly to a self-contained, well defined and demonstrably extremely wicked Melniboné as the chief villain of the piece. A Melniboné which signifies nothing, perhaps, but itself.

If you are at this point querying whether a novel set in a fantasy world far away from ours in time and space, really is (or ever was) the best place to discuss contemporary urban revolution… the Legion thinks Moorcock would agree with you. That’s probably why he re-wrote Elric’s early short stories (amusingly, pretty much scene-for-scene) into the first Jerry Cornelius book, the Final Programme, starting in 1965. And yes, the Legion knows Andreas Baader and the Angry Brigade didn’t get going until 1968 or 1970. Moorcock had his finger on the pulse alright. Or, as Jerry himself puts it in the movie version – when someone accuses him of looking ahead – “I look around. Ahead’s already here.”

The late, great Jon Finch in the 1973 film of The Final Programme

Looking around, the Legion predicts that Le Trône de Rubis will launch this new series of albums with a very big splash. Looking ahead, we can’t wait for the English translation, reportedly on its way from Titan Books, or for the next volume. It’s like being that young Moorcock fan in the early 1970s all over again, wolfing down a Mayflower paperback and salivating in anticipation of the next one. As we contemplate our diet-resistant middle-aged spread and rapidly greying Barnet, we must acknowledge what a great achievement this is for Julien Blondel and his trio of artists.

The Legion salutes you, mes braves.

The Legion’s review of the next book in this series, Stormbringer, can be read here

4 Responses to MICHAEL MOORCOCK’S ELRIC: Return to the Ruby Throne