ALSO LICHTENSTEIN, HALFTONE AND POLKE DOTS… plus the ones in the comic books.

Many of you reading this post will know what Ben Day dots are… or at least, you might think you do. They are the yellow, red and blue dots used in cheap printing to make lighter tones of those primary colours, and secondary colours like orange, green and purple. Yes… I used to think so too!

The familiar Ben Day dots. Or… are they?

Ben Day dots are not exactly a common topic of conversation in households across the land, but thanks to Roy Lichtenstein, they have had a new lease of life. When they come up, it is very likely that they are associated with Lichtenstein’s name and art.

After all, he was the man who created the single best-known Pop Art style using those dots—a style which has come to define for many people how both Pop Art and comic book art look since the early 1960s. 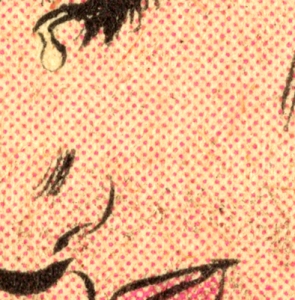 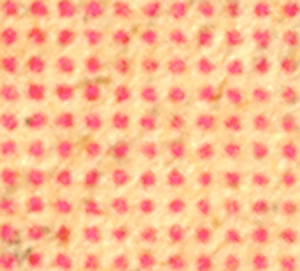 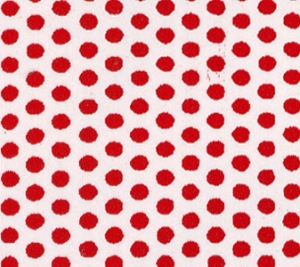 In fact most academic writers on Lichtenstein agree that he painted dots “derived from” or “similar to” the Ben Day dots of the comics. It is mainly journalists and non-professionals who actually state outright that he painted Ben Day dots. Or, more commonly, Benday dots. Or… hang on, Wikipedia currently has an entry on Ben-Day dots, with a hyphen. Webster’s online has “benday.”

OK… how are we spelling this, exactly?

Like pretty much everyone else who ever wrote about them, I originally called the dots in the comic books Benday dots. Most of the time that’s how they are referred to. In printed interviews with Lichtenstein, from early on, this spelling was used. In his 1946 booklet How Comic Strips Are Made comic strip scripter Russ Winterbotham refers to the “the Benday process” and the “Benday room” where it was done. Marie Severin’s colour guide for the cover of the EC comic Weird Science Fantasy no. 25 (cover date September 1954) refers to “Benday” in the margin notes. Adam Gopnik, in his dissection of comics and art in High & Low (1990), calls them Benday dots.  So does Harry Cooper in his essay ‘On The Dot’ in the catalogue of the Tate Modern’s 2013 Lichtenstein retrospective.

However, looking into their history, I soon found out they really ought to be called Ben Day dots—two words, both capitalised, no hyphen. (I have gone back and corrected my original post.)

Why Ben Day? Luckily that’s an easy one to answer. They were invented in 1879 by a man called Benjamin Henry Day Jr, and the company he founded to market his invention was called the Ben Day Company.

After that everything gets more complicated. In fact, whereas I thought I knew a lot about Ben Day dots, I found that most of what I knew was wrong. Starting with the Ben Day dots on the pages of the comics themselves. It turns out they aren’t really Ben Day dots either—not if you want to be really accurate about it.

So… what actually are Ben Day dots?

Firstly, something which they are definitely not—halftone dots. Ben Day dots and halftone dots are often referred to as if they were interchangeable, or Ben Days were a type of halftone. Neither is strictly correct, though even Roy Lichtenstein was known to have made this rookie error.

OK… what is a halftone dot?

The halftone screen was perfected in the 1880’s (after many failed attempts at something similar). It provided a method for breaking up a continuously toned image, made up of shades of grey—such as a photograph—into thousands of tiny black and white dots. (A similar process can be applied to colour images, but let’s keep this simple and 19th century.)

And yes, a photographic print is already made up of a lot of very very tiny dots—but they are irregular in shape and greyness and too tiny to be of any use in printing the photo. They effectively make up continuous grey tones, as far as both the human eye and the printer’s engraving process are concerned.

Halftone screening was needed because continuous grey tones could not be printed by simple, cheap letterpress printing, of the kind used for newspapers, magazines, comics and most packaging. Letterpress either prints black (or solid colour)—where metal coated with ink meets paper—or leaves a white area, where no metal presses on the paper, and no ink transfers.

Letterpress can handle a line drawing, words set in metal type, or a solid block of black (or another colour). Before halftones, a photograph could not be transferred effectively to a printing plate. In the acid-etching stage of photoengraving, the metal printing plate would keep only the darker parts of the picture as a solid printing surface—printed black in the image shown below. The lighter areas would make a crumbly mess which would literally break away from the metal, leaving non-printing areas—white in this example. 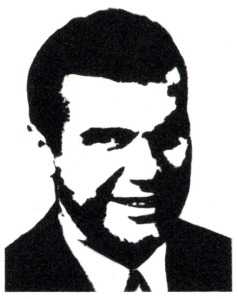 A photograph and an unscreened print

(taken from the book Advertising Production by Ben Dalgin, 1946)

The original version of the half tone screen was made by engraving two pieces of glass with parallel lines of mechanical exactitude, very close together. These were filled with black paint, leaving clear lines in the glass between black lines. When the pieces of glass were placed at right angles to each other, the resultant “screen” allowed light to pass through a regular grid pattern of clear squares, acting like thousands of tiny pinhole cameras.

Close-up of part of a halftone screen (from Dalgin)

Placed at the correct focal distance from a photograph or negative, the screen could be used to project a clear image in which the grey tones now appeared as patterns of dots. Pale greys became regular areas of small dots, darker greys were made up of larger dots, mid tones looked like a tiny chequerboard, and darker greys were white dots on black. With good technique, white remained white and black black. A positive or negative image could be made, according to requirements. 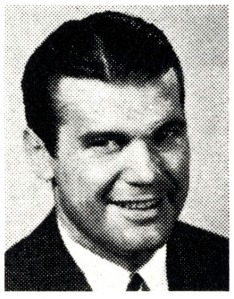 The same image printed after screening

This image was suitable for letterpress printing. The number of lines per inch (or lpi) used to create the dots was varied according to the final print quality. Glossy magazines might use 150 or even 200 lpi. Printing on newsprint most commonly used 65 lpi in 1946, according to Dalgin. 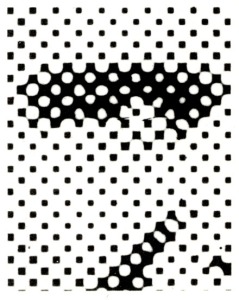 Detail of the halftone image, from Dalgin 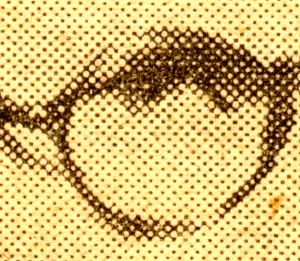 Another fun one. This is Joseph P. Kennedy—JFK’s dad

The key thing about halftone dots is that they vary in size. Ben Day dots, as we shall see, are all the same size in a regular pattern. Halftone dots create the illusion of continuous shades of grey. Ben Day dots are intended to create an illusion of areas of “flat” tone or colour.

Sigmar Polke is probably the best-known artist to incorporate halftone dots, blown up to large (easily visible) size, in his work. Quite different from Roy L’s dots, as you can see. 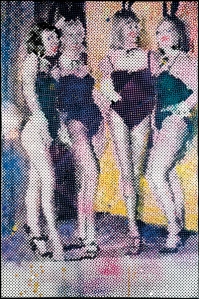 Roy Lichtenstein used some halftone-like, varied-size dots later in his career, but for the first few years his style was based on uniform dots similar to those produced by the Ben Day Process.

In Part 3:  How colour is made by comic book dots, CMYK 4-colour printing, & the pixels on your screen 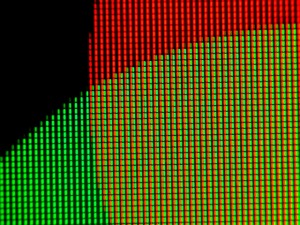 In Part 4: The Secret Origin of Ben Day dots

Back to Part One: Roy Lichtenstein, the man who didn’t paint Ben Day dots

Text and original image copyright © The Legion of Andy 2016